Casual Mobile Game Statistics You Need to Know in 2021

Over 7000 casual games have been listed out according to certain aspects: convenience to obtain, simplicity to operate for new users, lower time-consumption, and hardware. Casual games, based on game tags of App Growing Global, are divided into 6 categories: painting, tile-matching, puzzle, simulation, music, and others.

Puzzle and m3-meta are dominant in 2021 top 100 promotion of casual mobile games.

In terms of categories, puzzle and match are still the biggest pillars of casual games, accounting for 41% and 35% respectively. M3-meta games most of which are played with a simulation game, ranking Top 1 in m3-meta games, became increasingly the mainstream, followed by M3-meta games, bubble shooter. In puzzle games, the word is the most popular type in mobile games, followed by coloring, puzzle, spot the difference, and sudoku. 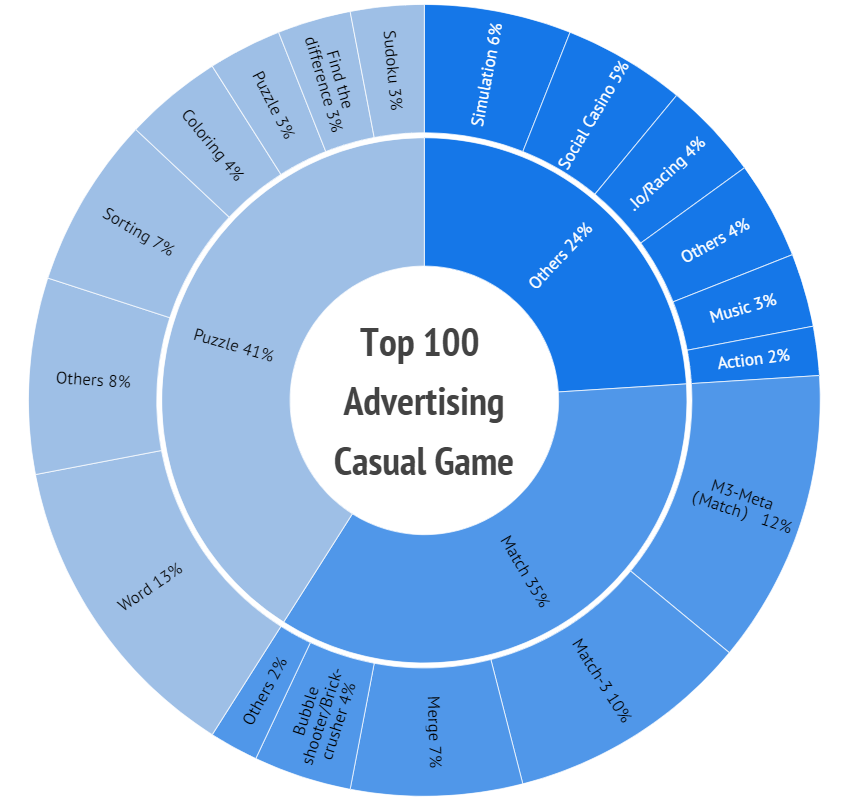 Coloring, word, m3-meta, match and merge are the main categories received most attention of top mobile game publishers from January to October 2021. The Ad volume of Top-ranked Puzzle Saga Studio has reached over  300,000  this year, which is more than 5 times comparing to the second-ranked , and the Ad volume of the Top 20 advertisers have reached above 10,000.

American top casual games' classification is more diversified, including coloring, spot the difference, Q&A, word, etc. In Japan, Playrix's classic m3-meta games made a clean sweep of the top three. Merge, the subgenre of Match games, such as Mergical, Meeerge were advertised strongly in Japan, South Korea, and Taiwan, China. The simulation game Idle Arks and word game wordscape are advertised well in Thailand and Indonesia.

According to global casual game advertising data rank monitored by App Growing Global, Google Play games occupied 16 seats. Project Makeover, Word connect, My Home, and Traffic Puzzle are advertised on both Google Play and IOS, which were on the list at the same time. 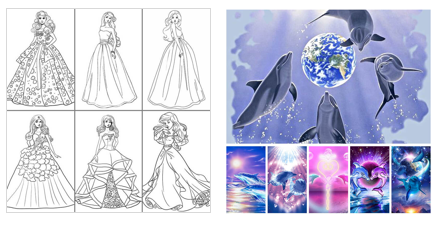 The Ads in Tap Color Lite focus on images to achieve communication effects of low investment, short cycle, low cost, and good economical benefit. The content mainly shows the rich graphics resources of the game and common themes include cute pets, clothing, art, cartoons, fashion, etc. The differences between gameplay and style of painting game are very few. Occasionally multiple games put the same Ad creative  based on the reference for each other. 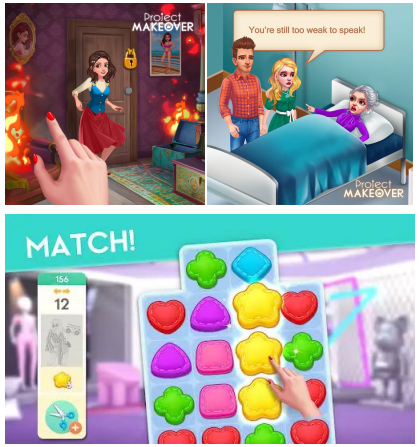 Give desperately needed makeovers to help characters to  achieve their dreams by choosing highly fashionable clothes, hairstyles, makeup and even furniture. The ad is given priority to video and images of the game. The video shows the core gameplay through life scenes and plot.  Leaving an imperfect ending of the video that generates interest and motivates users to play the game. 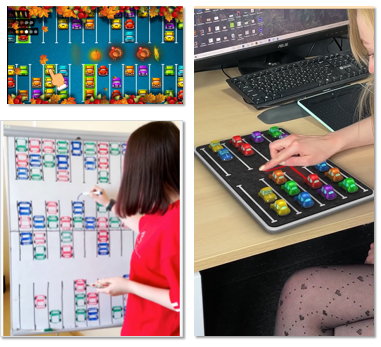 Traffic Puzzle is a match-3 game in which requires palyers to match colorful cars. This is a cartoon-style parking and traffic matching mobile game that combines the same cars to produce a cool match effect. Even though the game was released in 2018, it is still popular around the world, ranking in the top 20 downloads for a long time. The picture contains the core gameplay and life scenes, and a 3D game perspective to show the game and other presentation methods.

Conclusion on How to Advertise a Casual Mobile Game

The most important thing is to make players get the gameplay immediately.  Firstly, easy to operate for new users and bringing out the fun of the game is the most appealing point of casual games. Additionally, casual games with bright and vivid game images are more eye-catching. Secondly, to stimulate players’ ambition. As for plot settings, players are usually guided to  "fail-correct-complete" and "consecutive failures ". Thirdly, arouse players’ curiosity and conformity. Normally, publishers put offline game scenes in the game or enrich advertising creatives by integrating real-life scenes and social elements.

Here is some suggestion for mobile advertising creative of casual game.

The average viewing time of casual game ads is 4.2s. Players often want to experience the game quickly while spending as little learning time as possible. Therefore, gameplay will be displayed directly in ads which enable players to understand the game. Vertical screenplay and one-handed operation show the convenience of the game which cater to the preferences of casual game players. As for the game content is more complex and cannot to be fully displayed in the ad, it is common to show just single gameplay or idea.

It is common to see a designed failure ending in ads. Such ad trick is taking advantage of players’ obsessive-compulsive as leaving an imperfect ending so that players would download and play with it by themselves involuntarily, as well as stimulating players’ desire to win by utilizing provocative Ad description. Affected by confusing operations in the video, it motivates players' ambition to win.

Most players play casual games to relieve stress and  kill time while casual games Ad aims to provide aha moment to users in a short time. Even though aha moment could be different for individuals , some common advertising tricks can be summarized by integrating game content. Obsessive-compulsive players tend to collect, classify and generalize related contents. Some players like reactions brought out by exaggerated physical phenomena such as falling and collapsing. For some ads, the Ads creatives were produced by splicing the relieve-stress videos directly from the internet.

4. Experiment with different characters and styles

Adding game characters of Ad creatives is a common trick which highlights the features of the game, as well as to bring emotional resonance of the players. Due to the characteristics of the target segment , creators ought to consider creating diverse characters for displayed Ad creative.

For example, cute characters are more appealing to female players while characters such as superheroes are more suitable for male players. For the same game character,  it is worth trying different style and test out the most appealing Ad creative through changes in colors, hairstyles, and face expressions.

Video advertising is one of the most popular forms. For casual games, the content of videos can not only show the gameplay but also add some nonexistent elements or plots in the game to enhance the appeal. Playable Ad is  very promising for two reasons. The see-and-play feature of the Ad allows users to become addicted and download games instantly. On the other hand,  high conversion rate and ROI are very attractive to advertisers.