In the first half of 2022, the restart of releasing Video Game Licenses has brought a "light spring rain" to China’s domestic mobile game market. On the other hand, the wave of Chinese mobile games going overseas still goes on, and more and more industry players are joining.

Data form AppGrowing shows that in the first half of 2022, the number of global mobile game ads has shown an increasing trend, and the competition for top traffic among mobile games from all over the world is constantly intensifying. 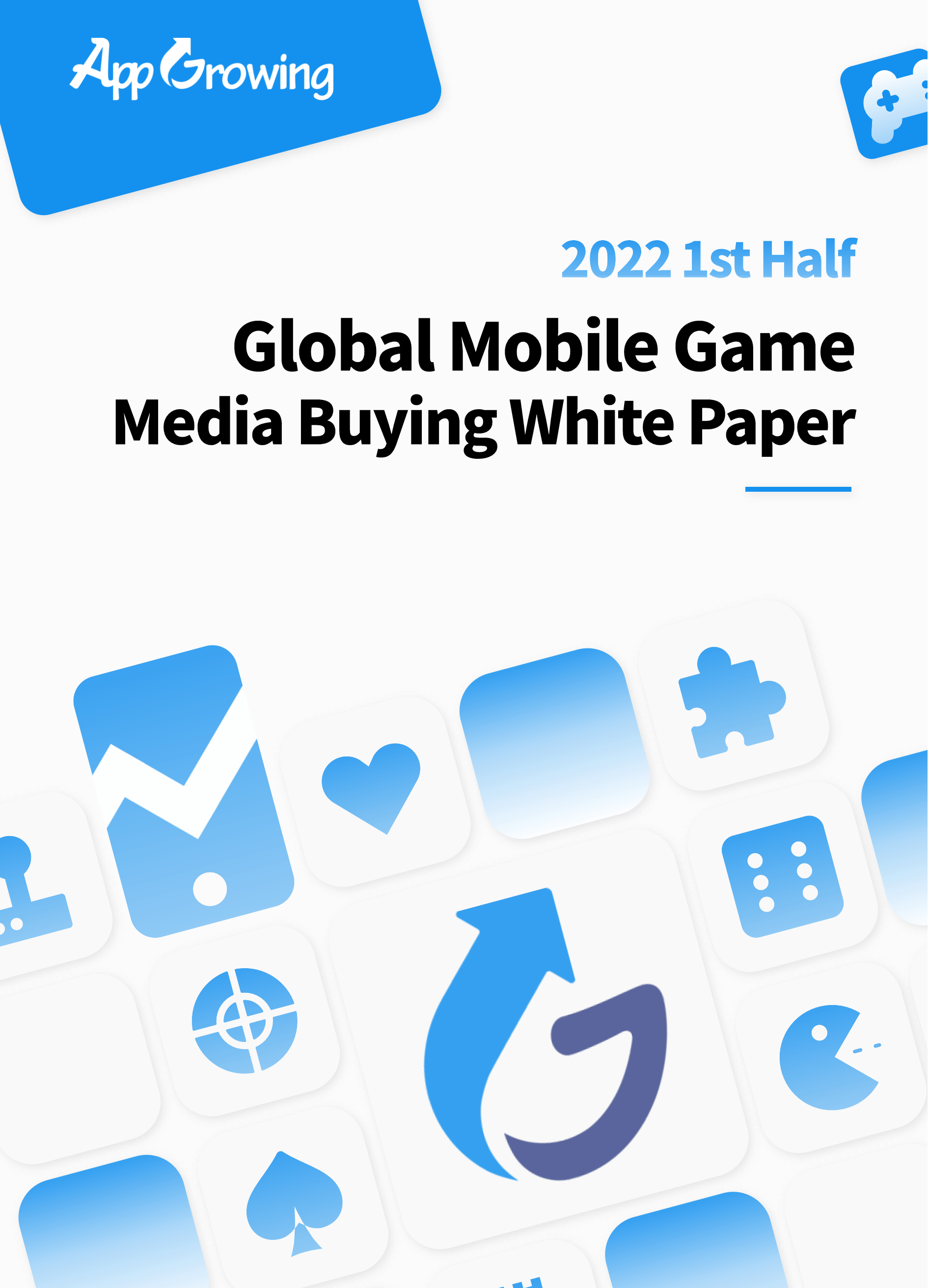 Mobile game industry has always been an important advertiser in the mobile advertising market, contributing about 30% of total ad volume. The continuous rise of mobile game ads indicates that global mobile game marketing and promotion are increasingly dependent on media buying which have become an important customer acquisition means. 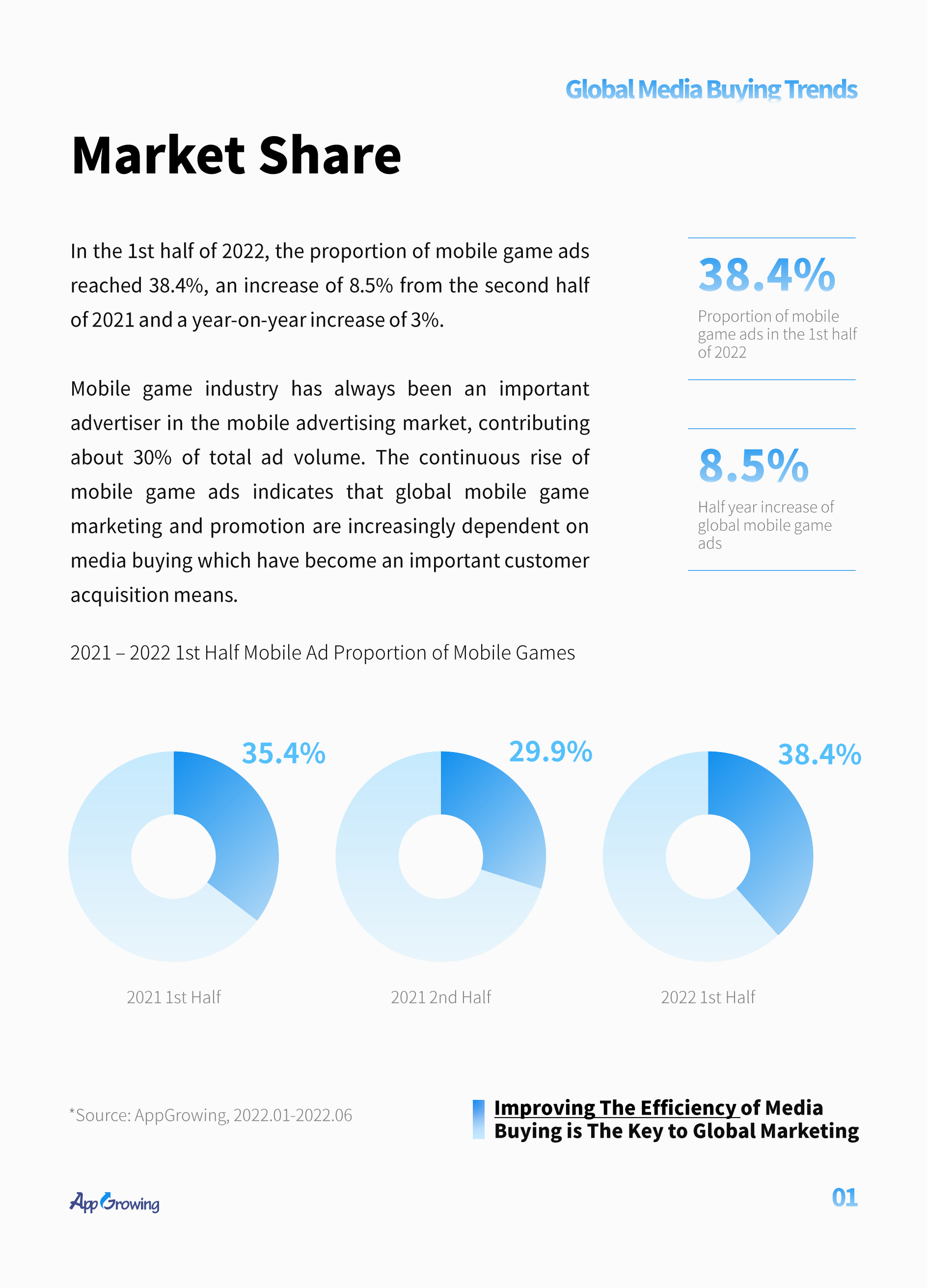 The overall number of advertised mobile games in the 1st half of 2022 shows a slight upward trend in fluctuations. In 47 major markets around the world, every month, there are more than 20,000 mobile games with mobile ads.

Ad creative consumption also fluctuates but by a larger margin. 20,000+ mobile games consumed 950,000+ pieces of advertising material per month, which means that a mobile game needs to produce about 45 ad materials a month for marketing and customer acquisition averagely. 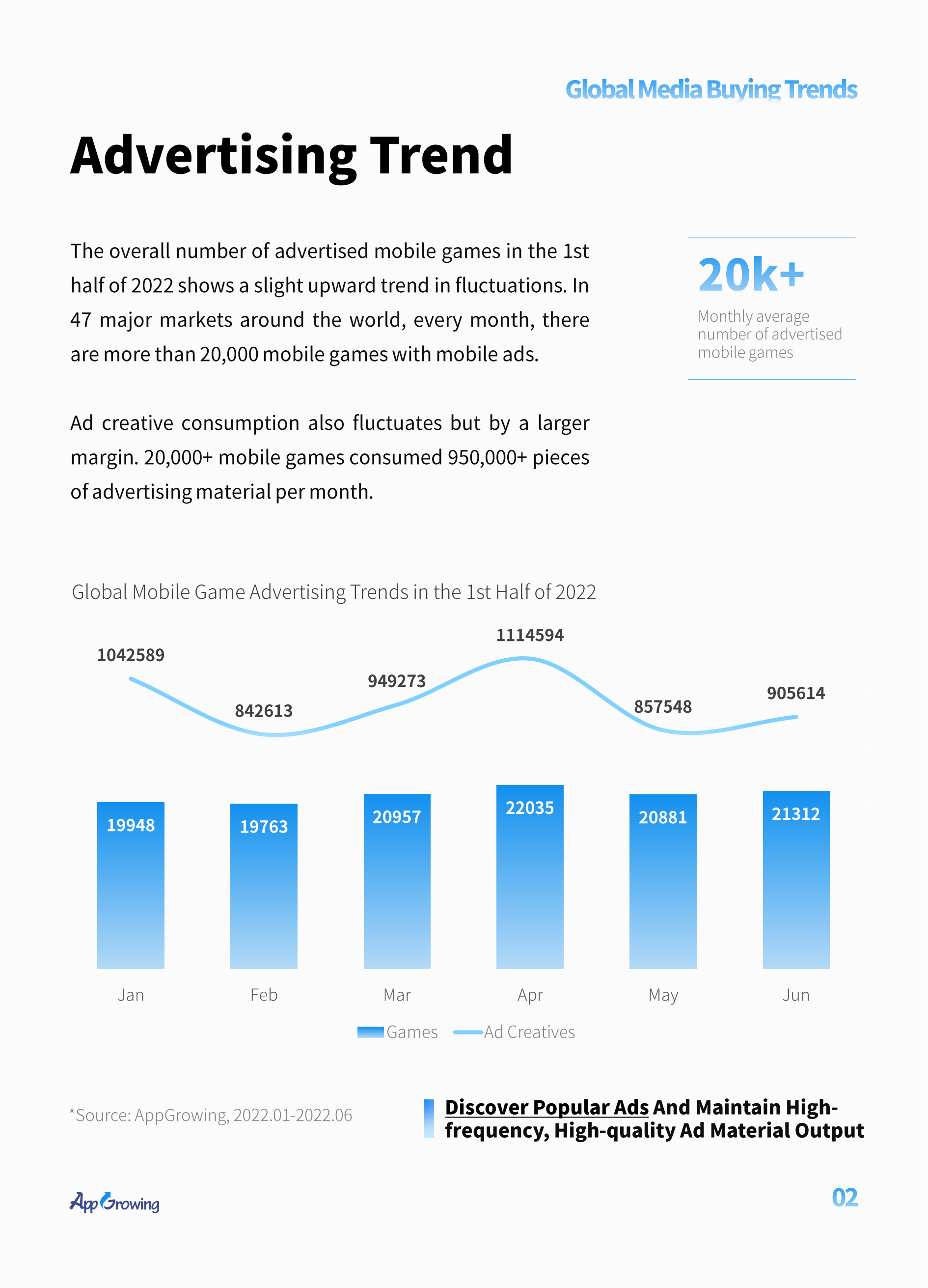 The distribution of advertised mobile games between Google Play and App Store is about 7:3. The proportion of mobile games advertisers on iOS dropped to 28.2% and Android accordingly increased to 71.8%.

The implementation of Apple’s new IDFA privacy policy made it difficult to accurately measure ad performance on the iOS devices. The ROI dropped because more ads were wasted. On the other hand, due to the changes in the general environment in recent years, the retention of iOS users has also declined to a certain extent, which has caused hesitation in advertising on iOS. 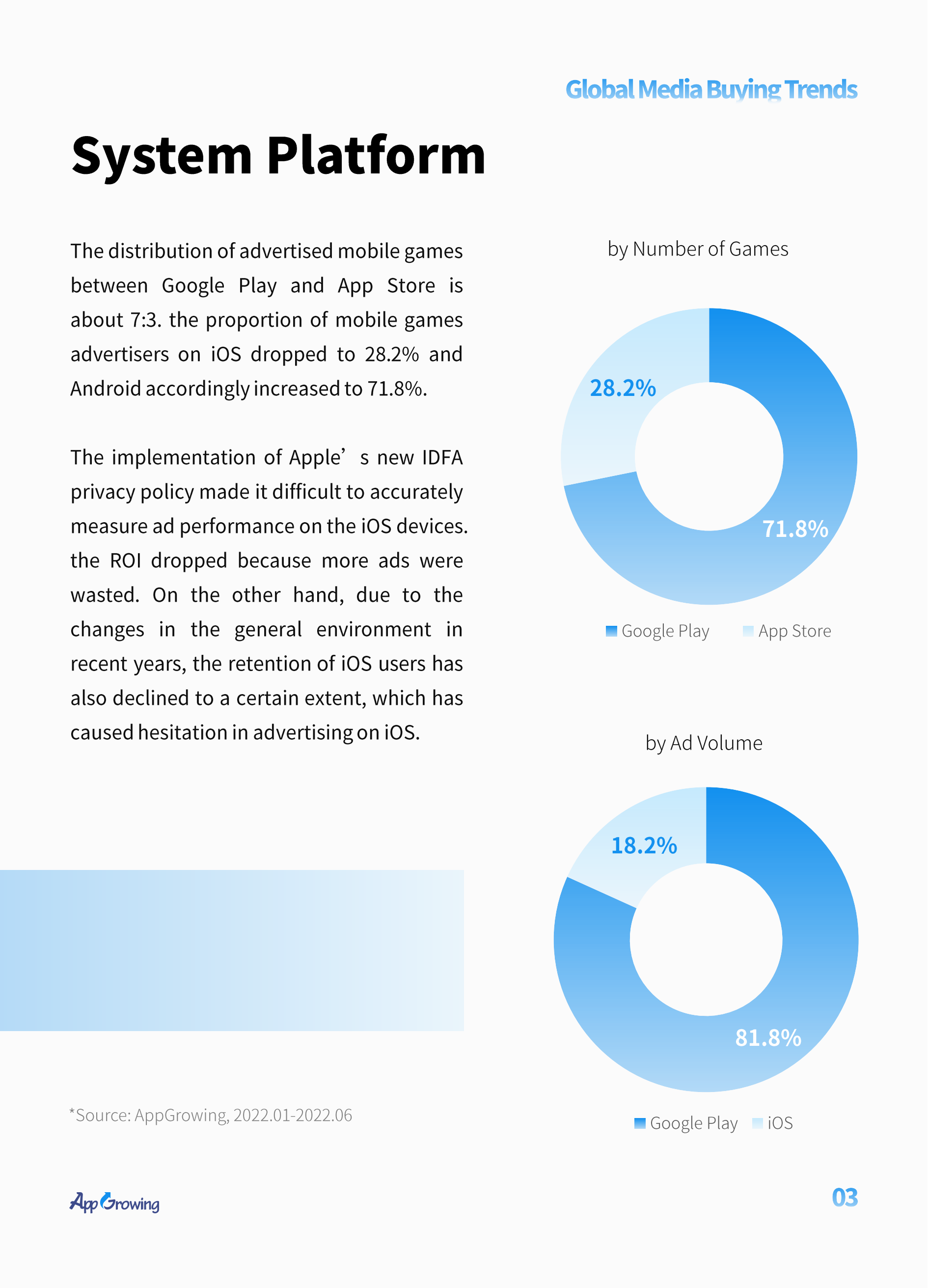 The six categories of Role Playing, Puzzle, Strategy, Casual, Action and Simulation accounted for 70% of the advertising volume in the first half of the year, and are the most competitive tracks.

Role Playing mobile games, which account for 6.5% of the total, have placed 15.9% of the total ads of the market, indicating the competition is extremely fierce. Similarly, Strategy games have also entered a period of high -intensity competition. 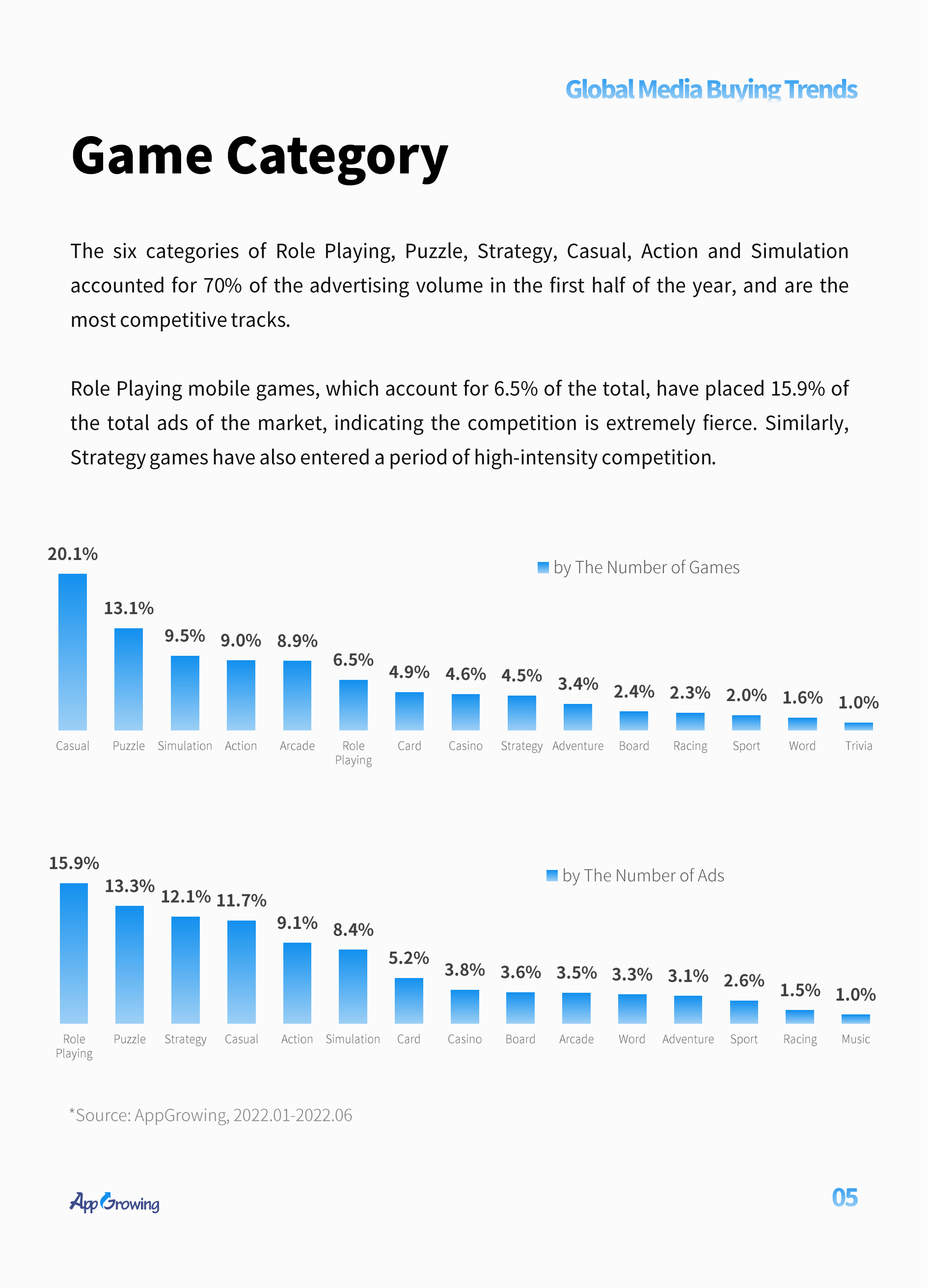 North America is the region with the highest ad volume. The cumulative ad volume share of United States in the first half of the year reached 7.0%. And Canada also had a share of 3.9%.

In those of regions consist complicated countries like Europe and Southeast Asia, the country with higher ad shares usually are tier 1 countries such as Singapore, United Kingdom, and Germany. 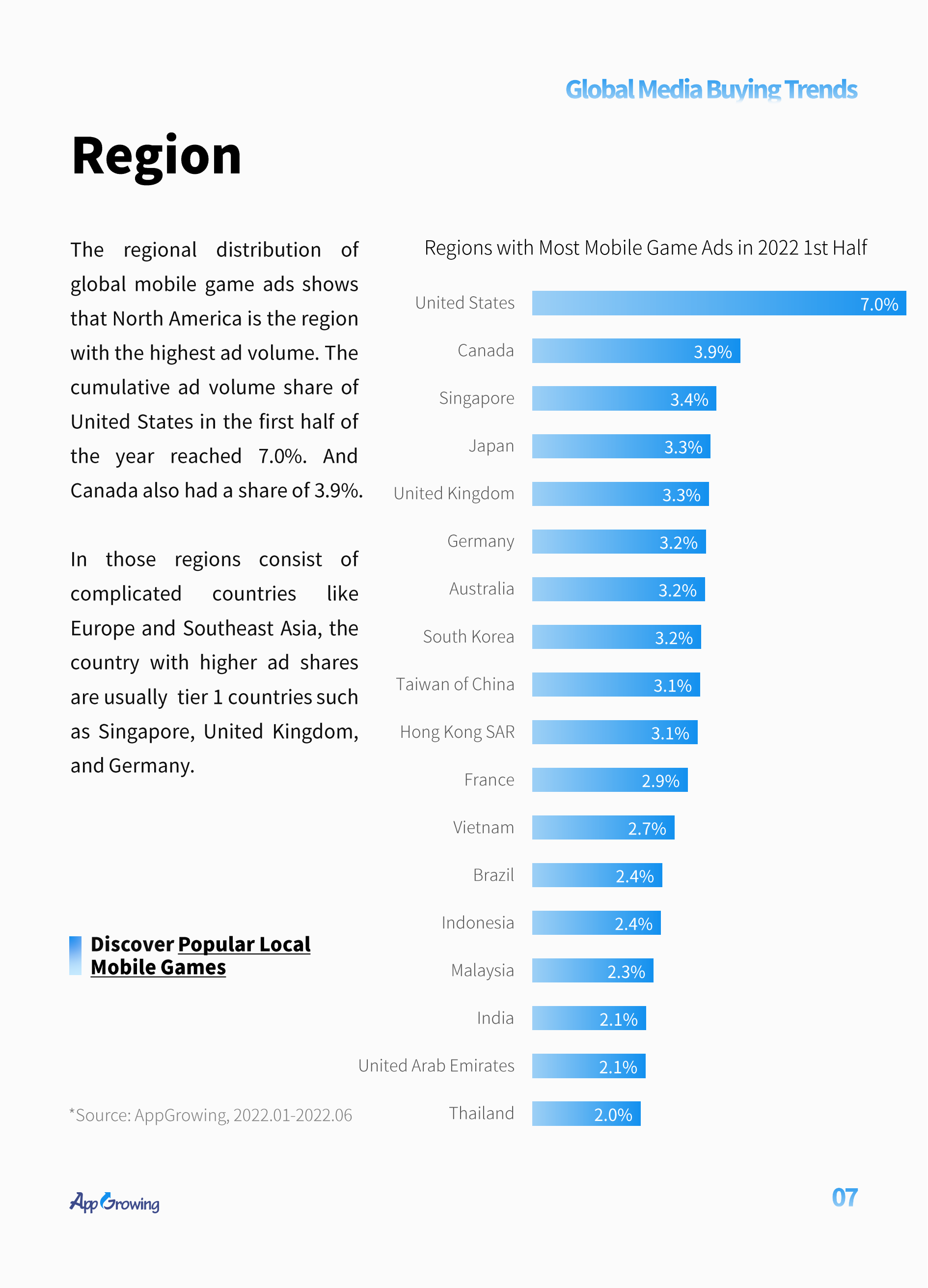 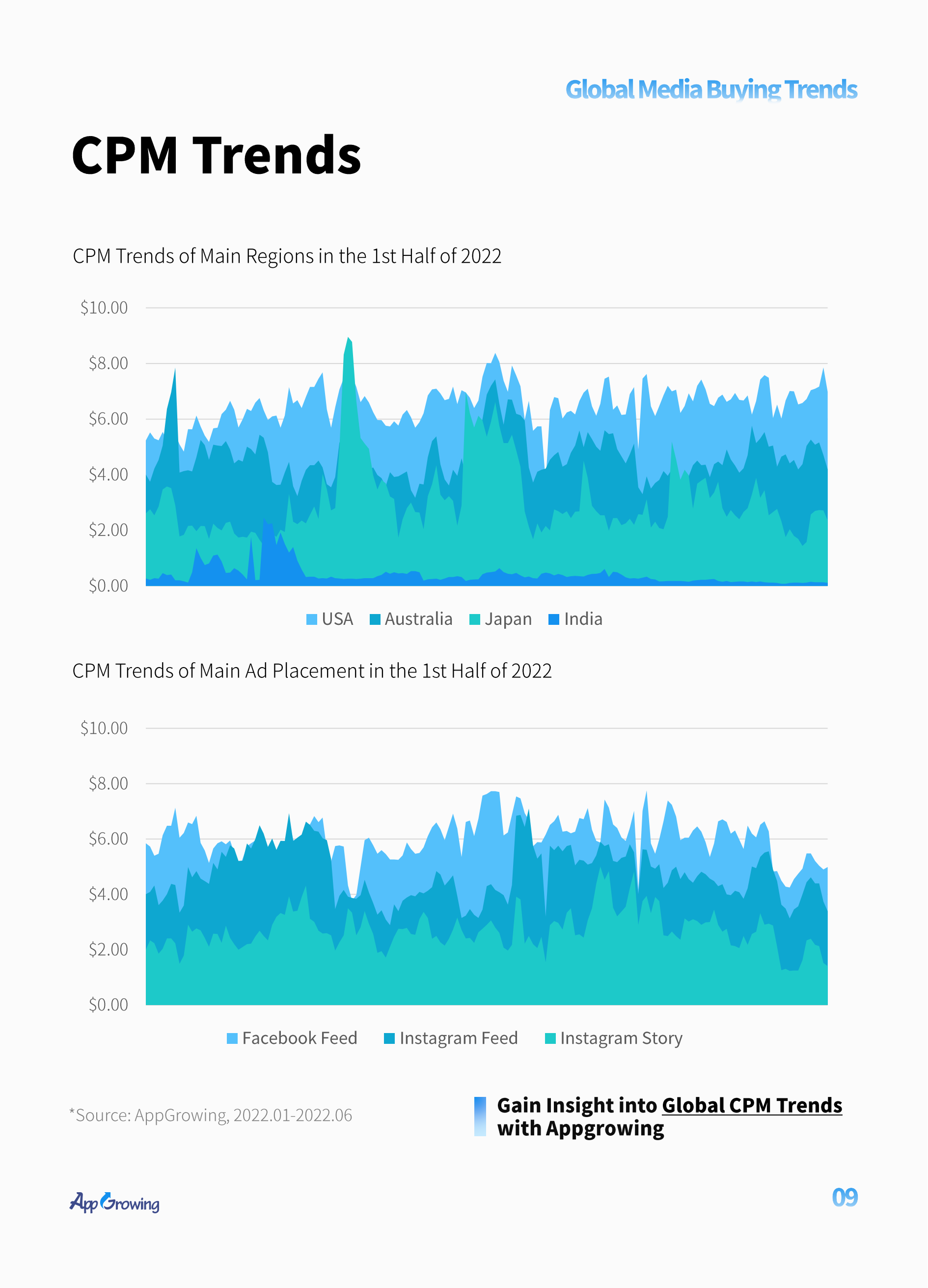 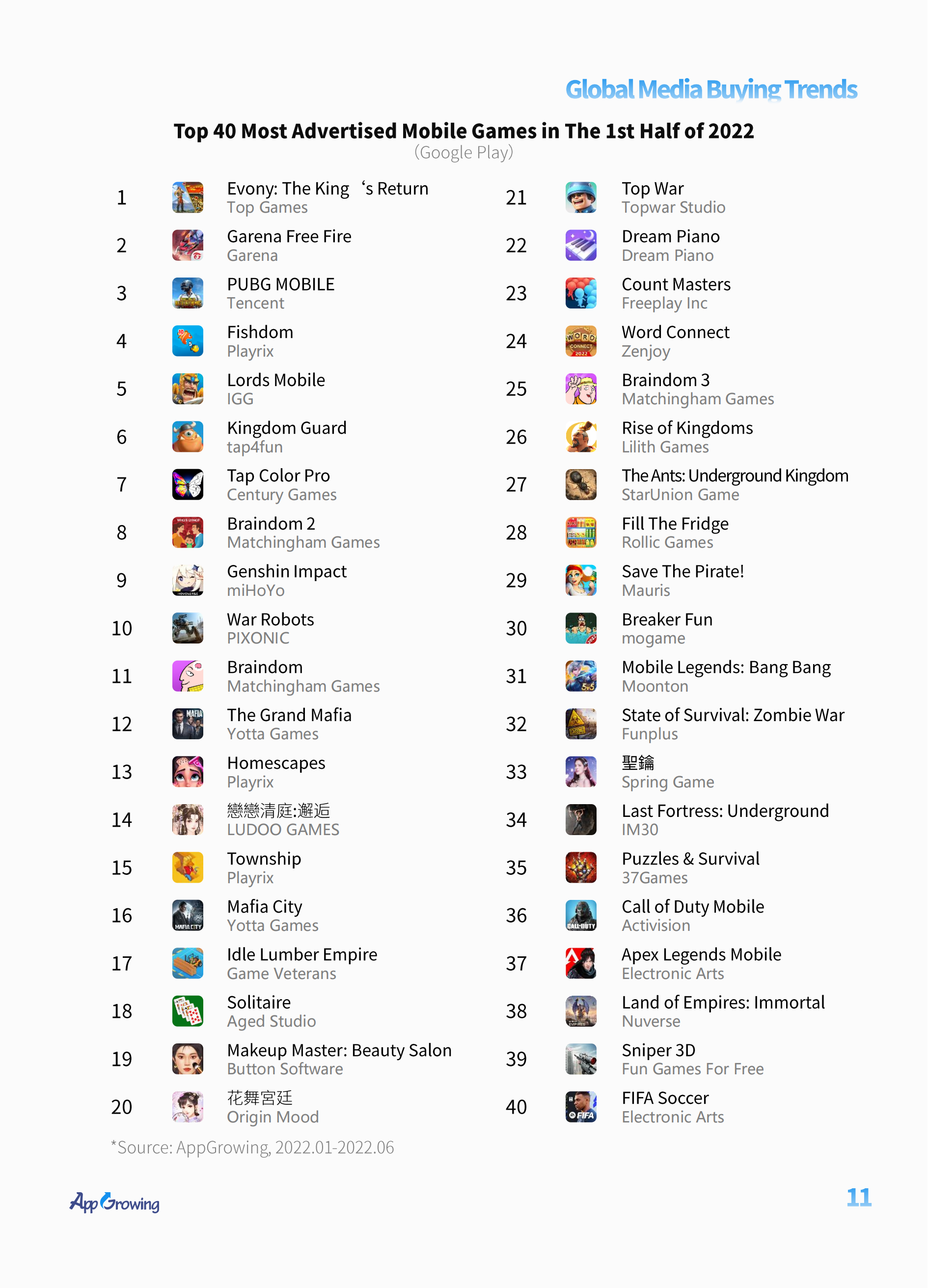 Due to the high R&D cost, only 220 new Role Playing mobile games on average were published in a single month in the 1st half of 2022. But the media buying competition is intense, especially in the early stage after the launch. In order to gain players' attention, Role Playing games usually raise bids to grab more traffic.

The main markets for Role Playing mobile games are concentrated in Asia, including Hong Kong SAR,Taiwan of China and South Korea.

But it is worth noting that the most advertised Role Playing game subgenre in the first half of this year is not MMOs, but Ancient Imperial as "戀戀清庭:邂逅" and "花舞宮廷" ranked first and second respectively. Among them, the former is concentrated in Singapore and Malaysia, and the latter is concentrated in Hong Kong SAR and Taiwan of China. These areas are the first choice for Ancient Imperial mobile games. 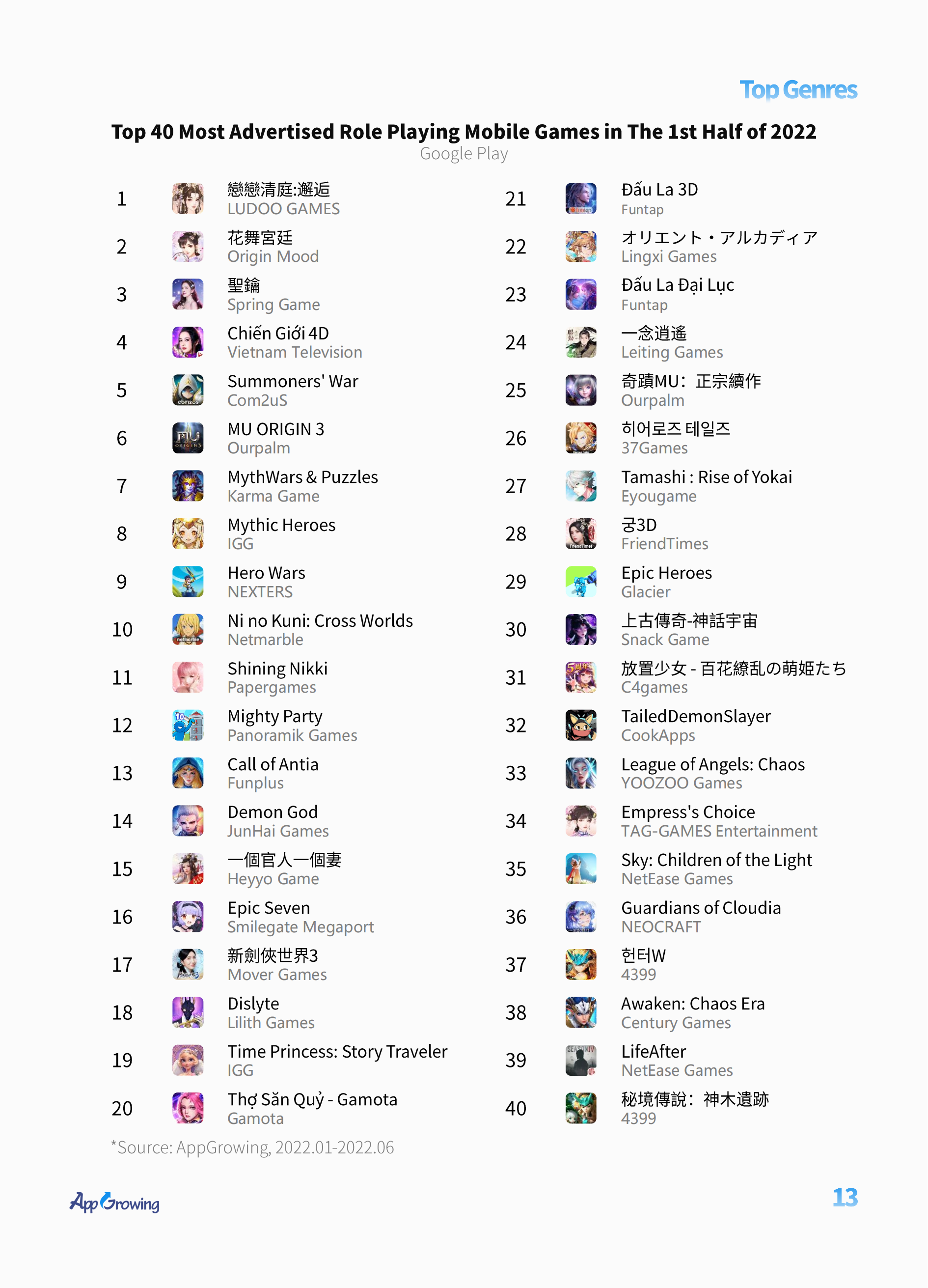 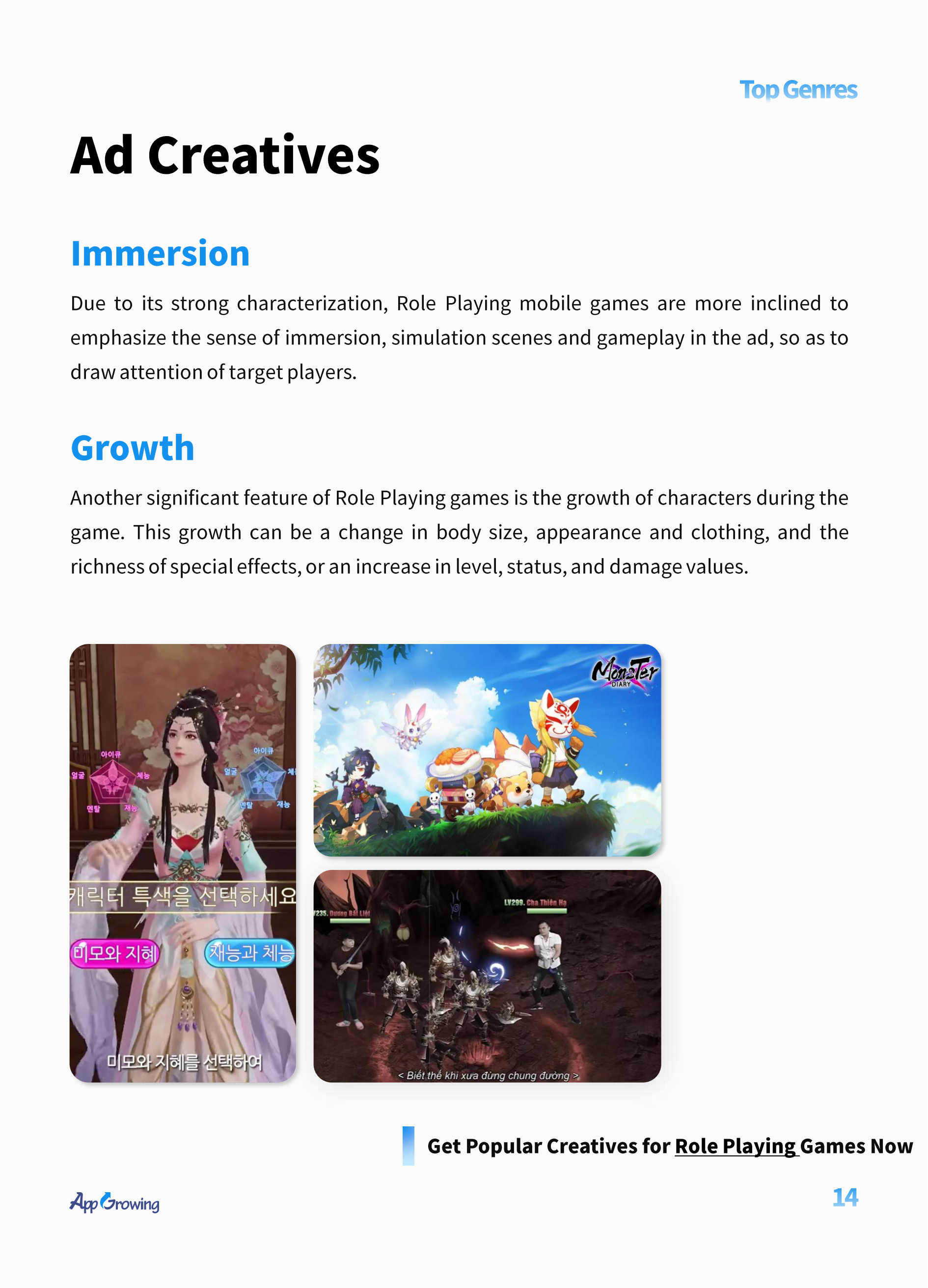 Different from Role Playing games, Puzzle games with a shorter production cycle are launched more frequently. In the 1st half of 2022, Every month, 500+ new games are published globally, and the overall trend is gradually increasing.

The key market for Puzzle games is North America. Puzzle mobile game ads in United States and Canada accounted for 10.4% of the total. 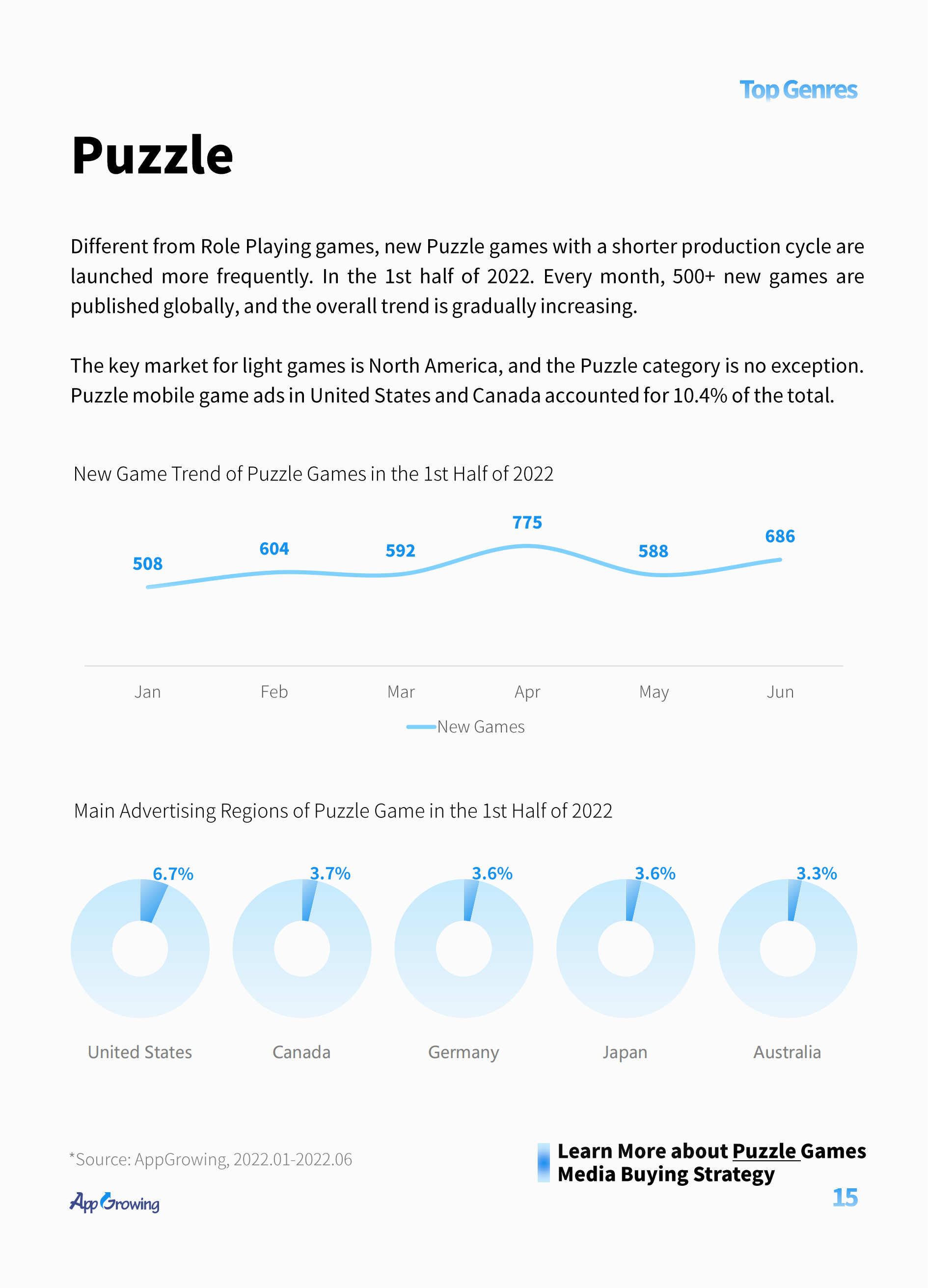 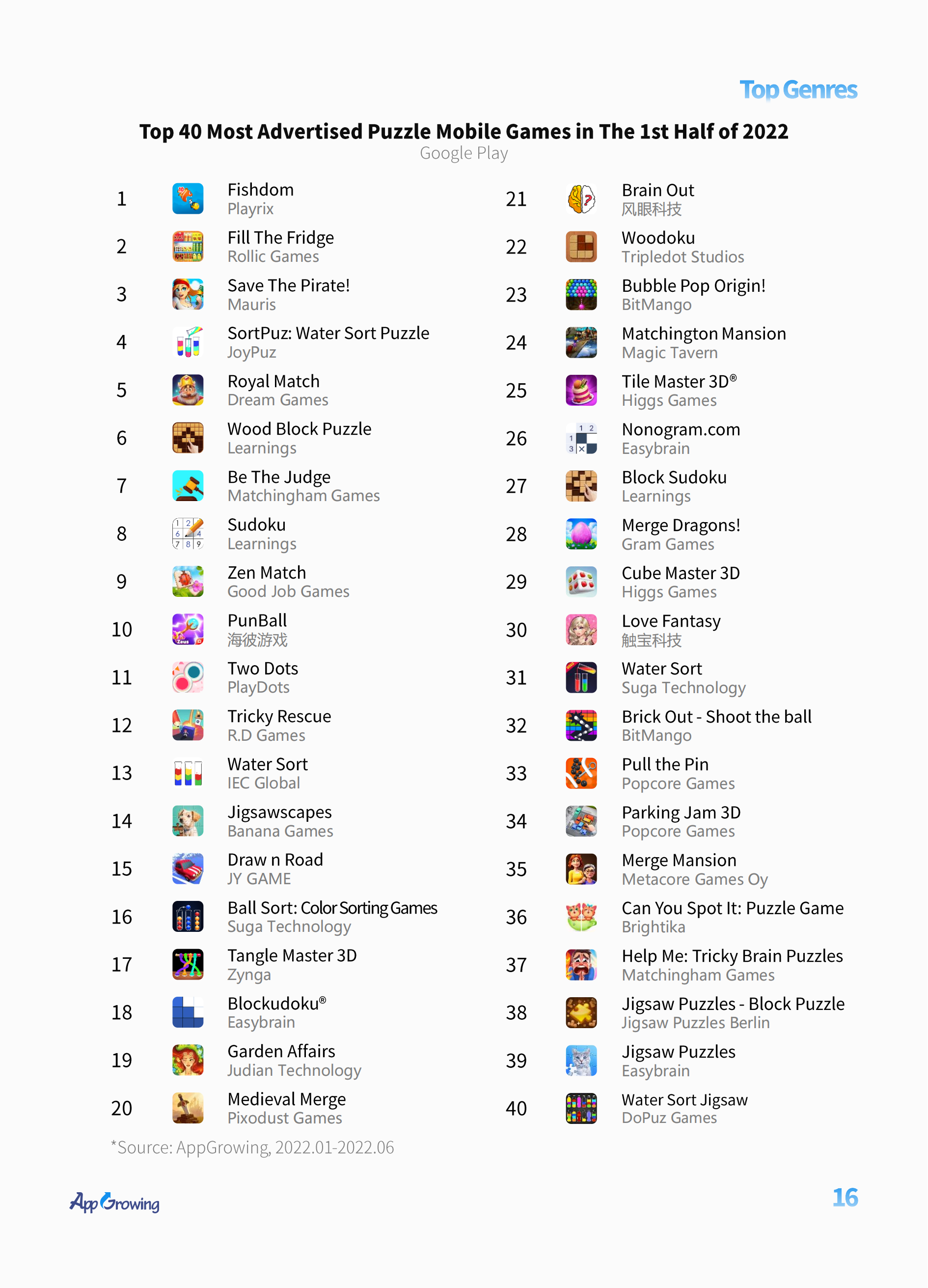 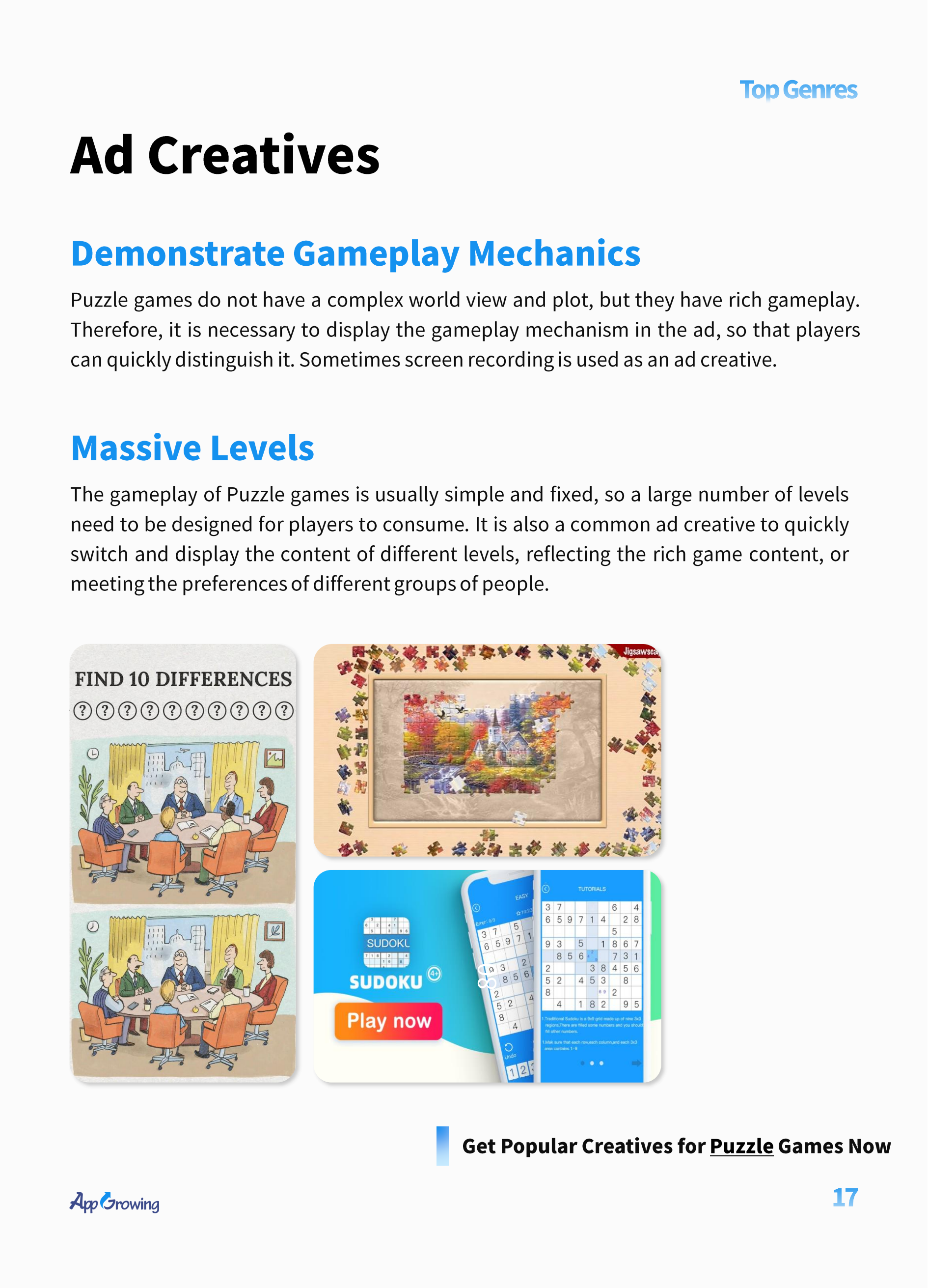 Strategy games are similar to Role Playing. There are only 176 new products launched on average every month. However, such games have fierce competition in terms of game quality and advertising expenditure. Its main markets are European and American countries represented by the United States, Canada, the United Kingdom, Germany, and so on.

In recent years, there have been many variants and fusion categories of Strategy games, such as match-3+SLG, idle+SLG, etc. On the one hand, this type does not have high requirements for players to operate, and it is easier to be published in the US market with a large base of Casual mobile game players. On the other hand, SLG's mature commercialization system also guarantees the long-term benefits. 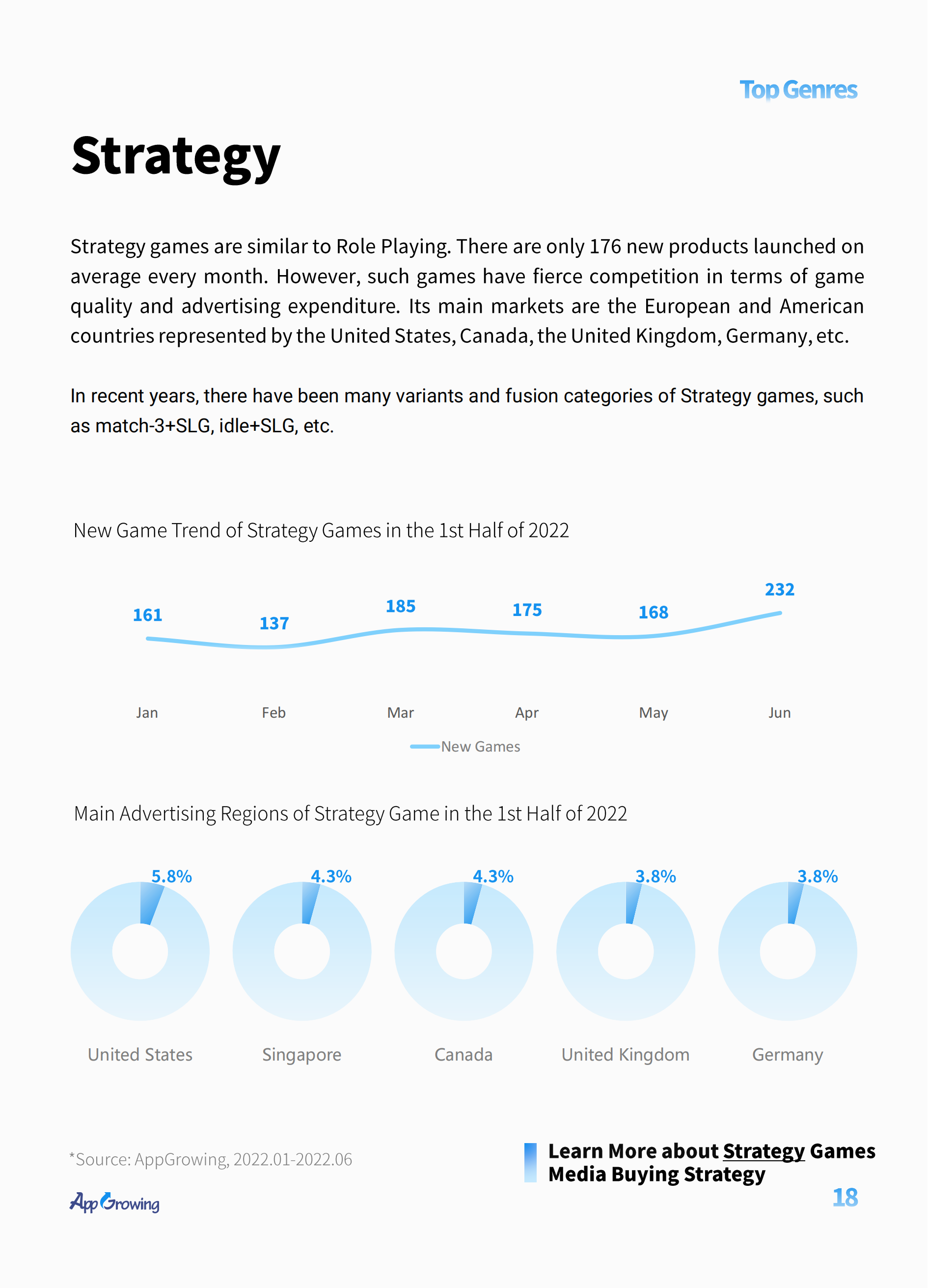 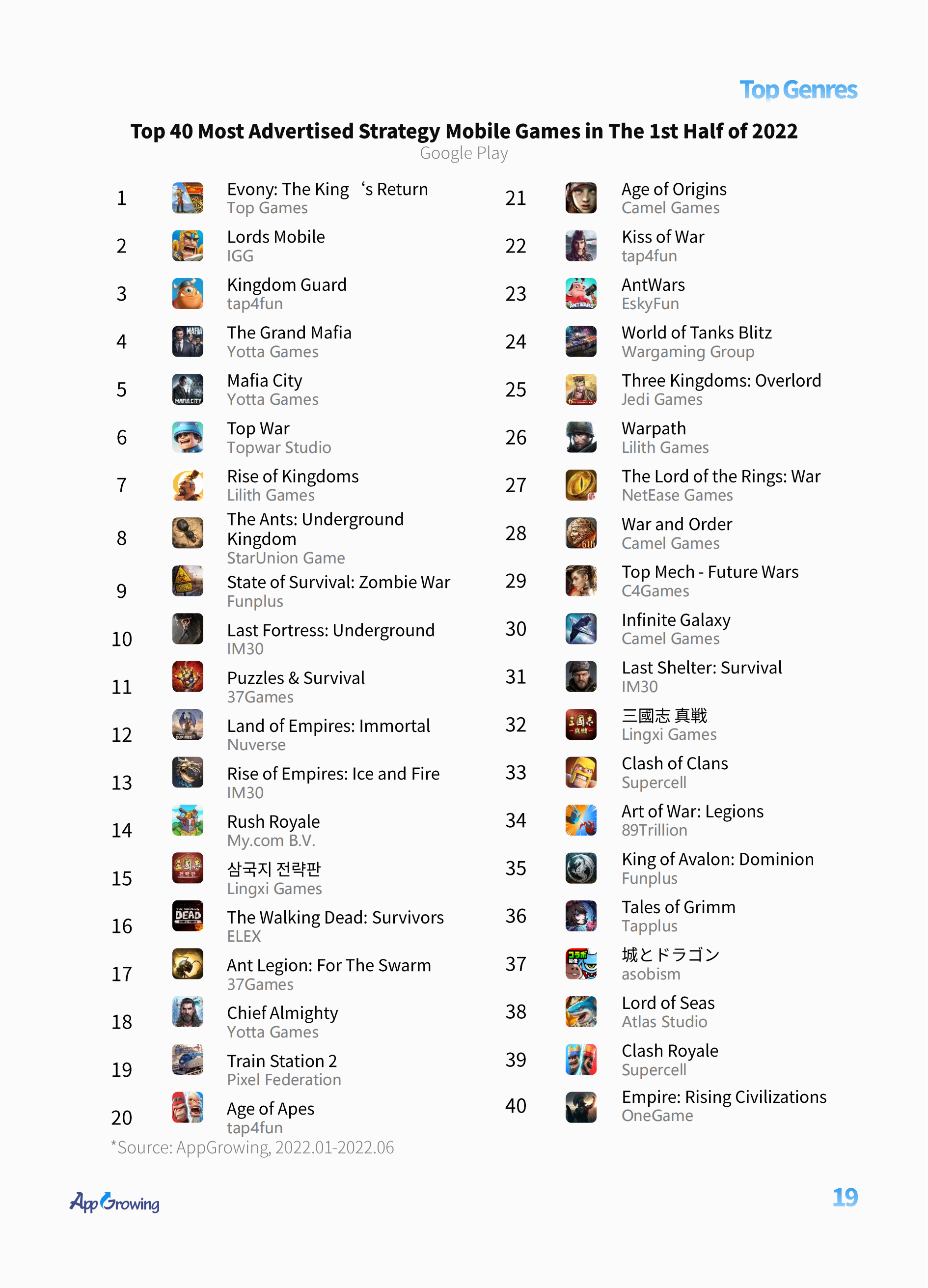 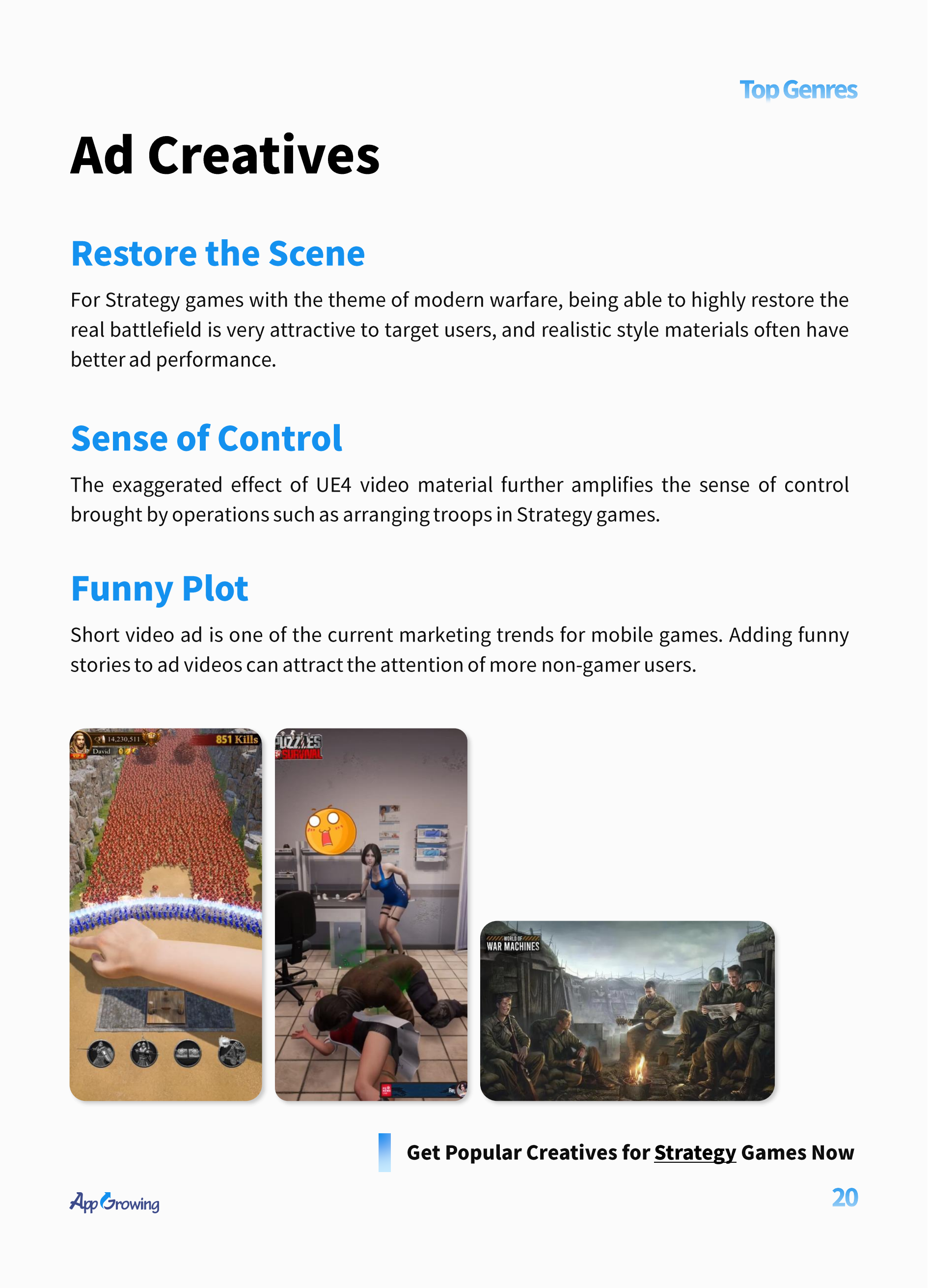 The main markets for Casual games are in Europe and America, of which the advertising volume in the North American market accounts for 10.8%.  In addition, Japan is also a market worthy of the attention of Casual game developers, and its ad volume accounts for 3.2%. 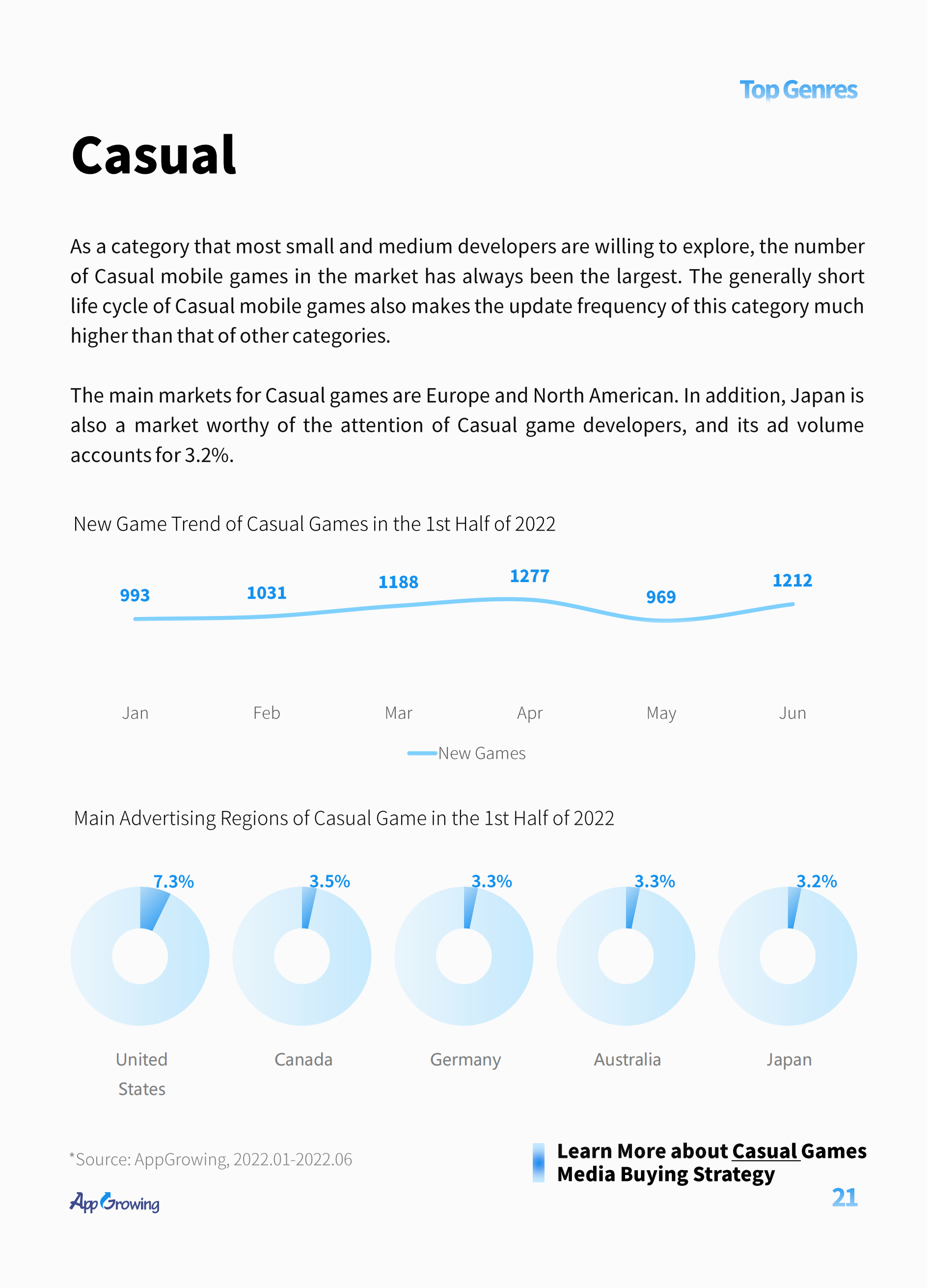 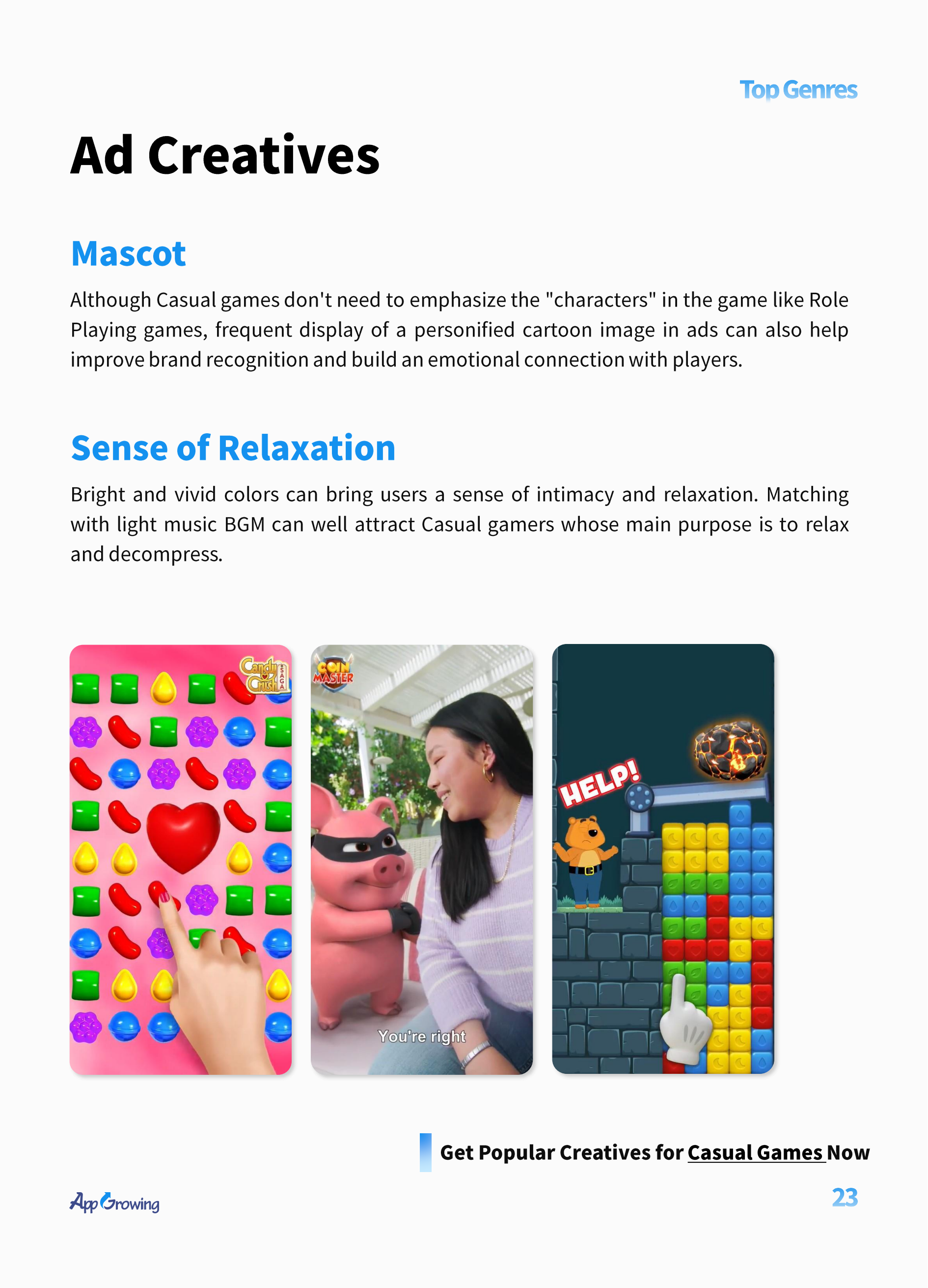 *The ad materials above are collected for research and analysis only. The content and opinions in this report are for information purpose only and are not intended to provide, and should not be relied on for, investment, legal, or other advice. All Rights Reserved.