Latin America mobile gaming market will approach 5.1 billion US dollars approximately in 2024 and revenue occupies 48% of the gaming industry. How to seize sufficient market opportunities in Latam? In this post, we will cast a light on mobile games in Latin America, as well as local marketing strategies.

To get the full report of the Mobile Gaming Market In Latin America, please download it Here.

Primarily, the continent of Latin America refers to the south region of the United States of America. In general, Latin America contains the state of Mexico, Central America, the West Indies, and the region of South America. There’re thirty-three countries in total. The major targeting states will be Mexico, Brazil, Argentina and Colombia.

The states of Brazil, Mexico and Argentina will be the primary market for mobile games.

Under the internal and external impacts, the economy for Latin America increases slowly consecutively in six years. However, the states of Brazil, Mexico and Argentina ranked the top GDP scale among the entire states. 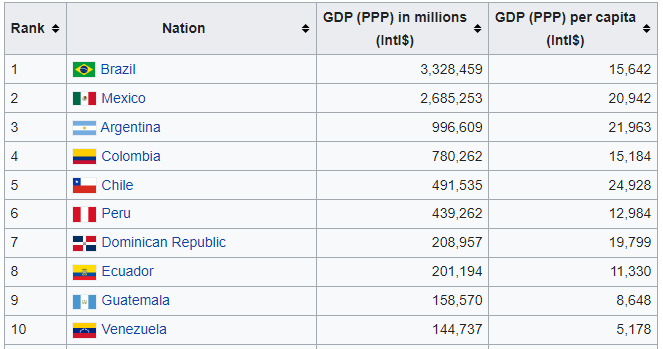 1.3.1 The number of youths booming and Huge Dividend of Population

The population base is relatively large and the number of populations in Latin America ranked TOP Four globally. There're more than two hundred million citizens in Brazil. Similar with South East Asia, the ratio of adults, aged from 15 to 64, rises annually and reached to 67% of the total population in 2020. So, the demographic structure is relatively young and there're huge population dividends for the region of Latin America. 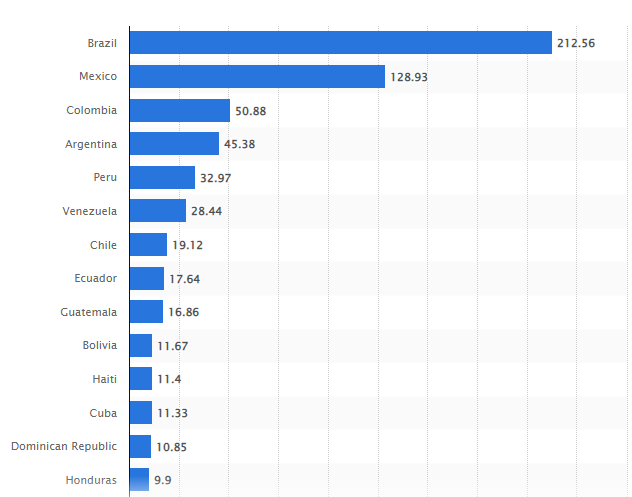 The Latin American Internet construction needs further improvement because of comparative lower penetration rates than the ratios of North America, Europe, Hong Kong and Taiwan. The speed of Broadband and Network is super slow and most of the mobiles belong to the elementary level. In that case, the memory size is little and is not enough for running too many applications at the same time. Thus, the game developers are supposed to make the download packages in minimum size as much as they could.

2.1 Marketing Size of the Mobile Game

In 2021, the categories of mobile games are prominent and revenue occupies 48% ultimately.

The scale of Host games or PC games exceeds a lot more than the corresponding industries in other regions in the world. Most Brazilian players enjoy the games through mobile devices. Respectively, the expense of mobile games, host games and PC games occupies 48%, 27% and 25%. In the year 2024, the revenue of mobile games will approach 5.1 billion US dollars approximately.

The state of Brazil is the largest mobile gaming market in Latin America. Brazil ranked 10th globally in 2020 and is twice the market scale in Vietnam. The state of Mexico, Chile and Argentina ranked subsequently. 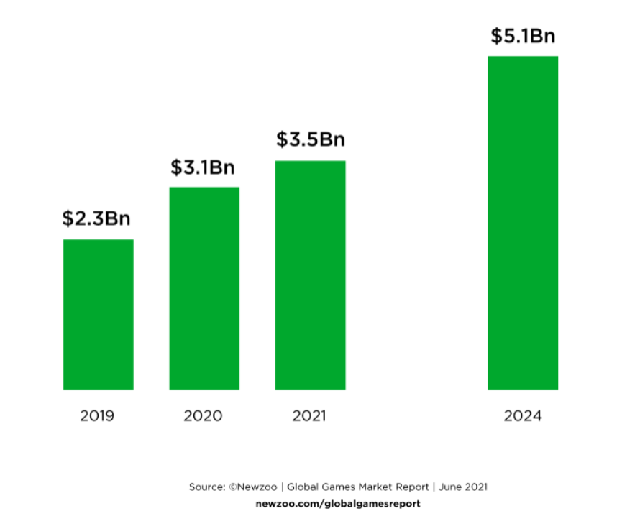 Among the top-grossing games, Strategy, Shooting, Roleplaying and Simulation games contributed more than 60% of the revenue. In terms of downloads, hypercasual games exceed 30% of the entire quantity and refer to the largest genre in the Latin American market, follow by Simulations and Actions. 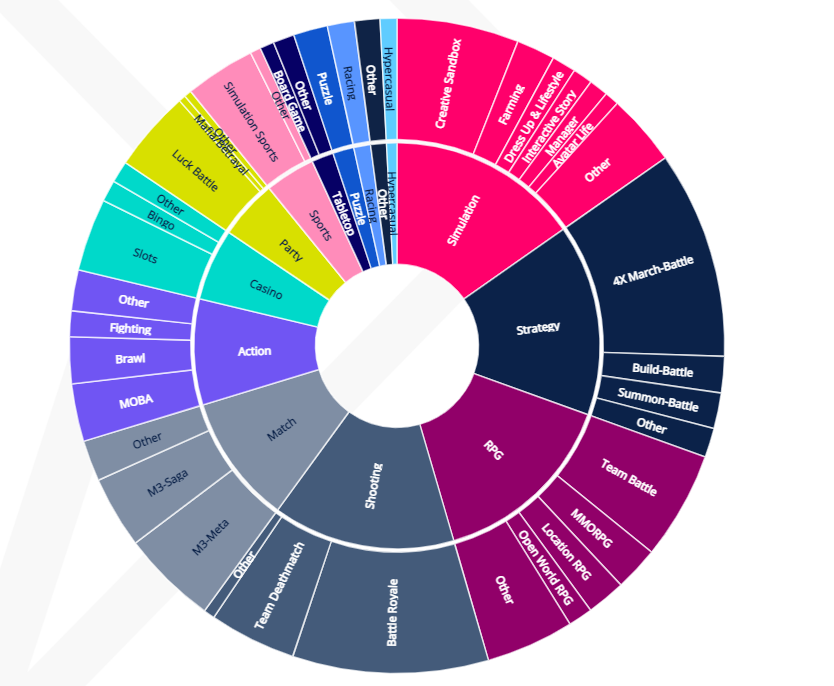 Though closer to the country of North America, consumers in Brazil prefer to try the impressive pro-competitive, sports-class and racing type mobile games. Based on the investigation, approximately one-fourth of the Brazilian players enjoy the pleasure of defeating others in the dedicated scenario while playing games successively. Thereby, in consideration of regional fans or players, casual games could input more mild competitive factors into the game products. The upgrading of roles and science fictional topics would be much more prevalent among Brazilian people than the ordinary games. 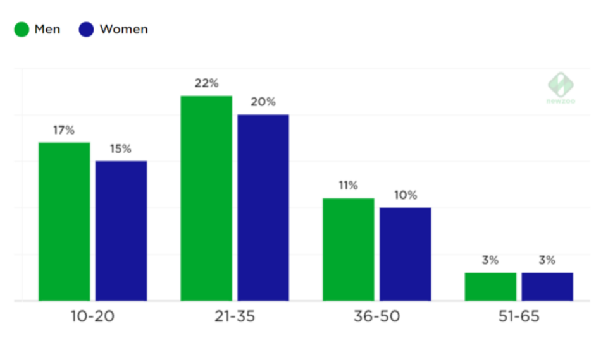 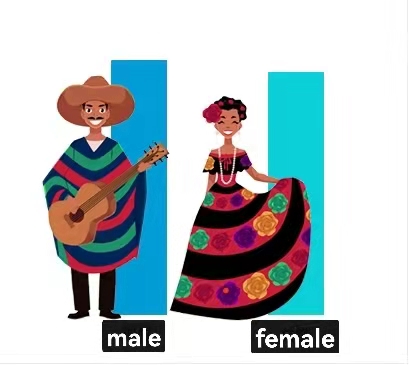 Nearly 50% of the Latin American players have the willingness to pay for the games they desire. The organization of ARPU estimates that their revenue will approach 27.3 USD in the annual season of 2021. The players’ affordability and associated purchasing powers are relatively weaker than the customers in other regions. Comparatively, there’re abundant improvement spaces for the game industry in Latin America. The prevailing virtual goods among mobile players refer to the currency or exchanges in the respective scenarios. 43% of the players are willing to purchase them

In general, Google Play dominates the service of charging fees and occupies around 68% of the stores’ revenue in the country of Latin America. Moreover, the modes of IOS and other thirty-party clients occupy around 29.9% and 1.5% individually.

Normally, Spanish is the dominant language been used widely in the country of Latin America and is also the formal language in most of the member states. Brazilians speak Portuguese mostly. Thus, developers need to care about the language version and sizes of application packages for various games.

The cultural differences in Brazil are not huge and relatively simple to learn the players’ interests or preferred behaviors. In contrast, the Hispanic states have a certain number of deviations in verbal or cultural fields. 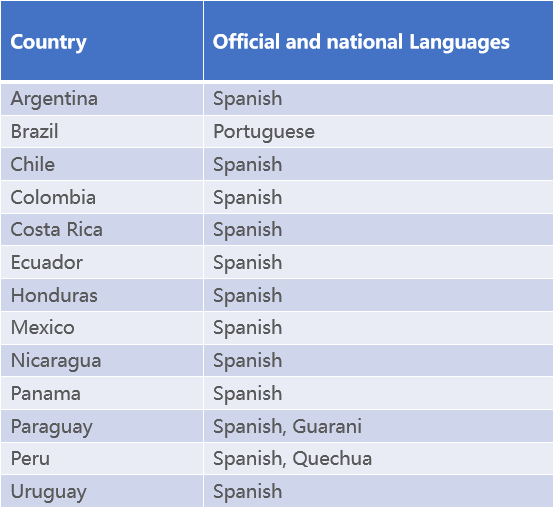 Though the dominant languages are Spanish and Portuguese, developers are supposed to note that there're still various huge deviations between pronunciation and phases been applied.

For instance, for the expression of the second person, the Spanish utilizes the phase of usted rather than the word of tú because tú is the inappropriate or informal grammar. Meanwhile, in the country of Latin America, residents would like to apply phrases of usted or ustedes for replacing the words of tú or vosotros.

In the state of Uruguay and partial regions of Argentina, residents pronounce the letter ll in SH rather Y in the words like llamar and lloro.

Normally, the words of você and tu represent the singular form of the second person as you in Portuguese. However, tu is not used frequently in Brazil.

In the country of Lain America, the number of non-banking clients is giant. Based on the inquiry, 70% of the population doesn't have any banking accounts yet. Nearly 80% of the people don't have any credit cards. In Argentina, the ratio of citizens keeping credit cards is less than 50% of the total population. Similarly, the proportion in Mexico is one-third solely. Among the gaming industry in Latin America, offline payment exceeds 50% of the whole transaction. If developers require the credit payments solely, corporations or enterprises will lose more than 50% of the income and revenue. Despite missing the consumers' passion, the VIP service and subscription are both efficient methodologies for players paying fees.

The platform of Google Play supports the common mode for payments in Brazil. Users could utilize domestic credit cards, Boleto, gift cards and other mobile platforms such as Recarga-Pay.

Holy Week / Easter Day: Holy Week refers to the most significant religious holiday in Hispanic society. Verbally, the Holy Week takes place a week earlier before Easter Day. The entire celebration days would last for a week annually. The church and Christians would have a series of religious celebration activities.

Christmas / Black Friday: In Brazil, the last Friday in November refers to the bonus day of Christmas among local communities. Usually, workers will receive double incomes from corporations or enterprises. Under the effect of prime planning or advanced promotion, customers and users would have more willingness to spend their payments than ordinary conditions. 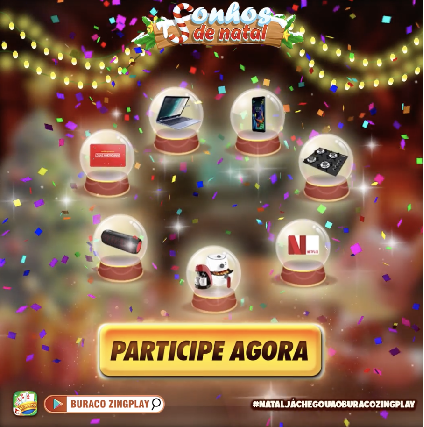 Under the deep impact of European aesthetic tropism and tendencies, people in Latin America are passionate and most of the natives are willing to express themselves in various ways. The group of females prefers vivid paints or exaggerated brands to the simple appearances.  Furthermore, the skintight apparel and sexy styles are prevailing among American females.

Most of the Hispanic states belong to the catholic nations. The rare of the Hispanic nations persist the faith of Christianism or Protestantism. Hence, manufacturers or developers are eligible to avoid the cultural or religious taboos while targetting in Latin Ameircan states.

For instance, people in Brazil would think the gesture of OK ribaldly. Figure Five in Chile is unlucky. Columbian citizens dislike the figures Thirteen and Friday. Residents in Columbia don't like the paint purple yet. 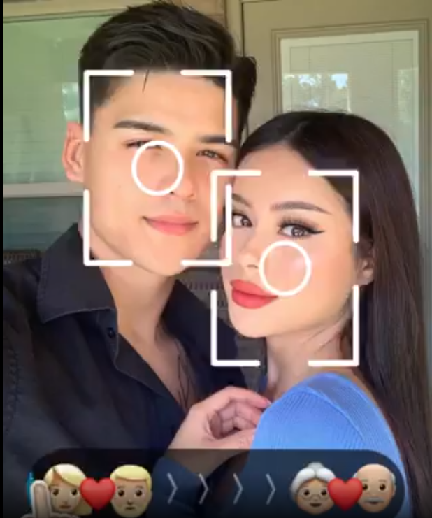 Latin Americans love soccer and choreographies. While planning, utilizing the elements of soccer or dancing would attract the players’ attention definitely.

The video clip of Idle Eleven takes advantage of the celebrity effects, which exploit the accessaries of Hispanic well-known soccer athletes sufficiently. Spontaneously, players in the targetted regions would have a sense of belonging or get the awareness of familiarity.

Developed by Supercell Co, Brawl Stars is an online competitive game, which allows a wide range of players to compete at the same time period. Published in three years, the game ranked TOP Twenty in Brazil.

Competition and socialization are essential for Latin America. The social networking functions as setting parties or participation of guilds promote players make progress in certain scenarios. 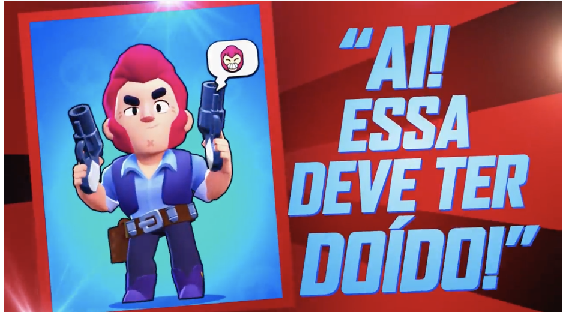 There’re numerous civic groups in the country of Latin America. The marketing-based strategy of people’s communication is vital. Utilizing fashionable KOLs or applying the celebrities’ effects could accelerate the promotion rapidly among local communities.

Latin Americans pursue racing and competition. Besides the actual campaign, citizens would like to participate in the online weekly activities. Concentration on the esports game may have more return on assets than inputting other aspects. The games' reputation and users' fellowship will both be upgraded in the future. 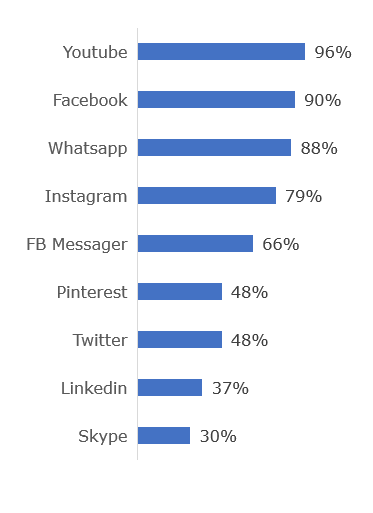 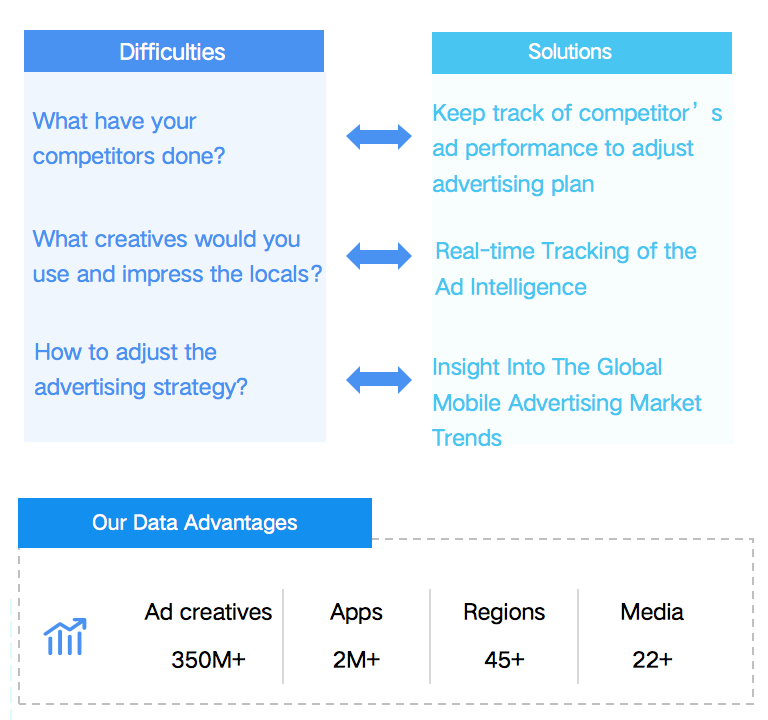 To get the full report of the Mobile Gaming Market in Latin America, please download it Here.